Analysis of cycle times with Cosmino MES Plus

By Hans-Peter Stöcker In Knowing the cycle time of a machine or line for the processing of a unit (TE = time per unit) is required to calculate offers and to define performance targets. Because figures such as machine efficiency require valid target times to display the complete existing optimisation potential. Daily reporting and calculations are not reliable without valid cycle parameters. A detailed planning of orders would also be based on false assumptions.For the calculation of the Overall Equipment Effectiveness (OEE), the so-called Technical Cycle is mostly used as cycle time for the manufacturing process of a cycle quantity (Technical Cycle = Machine time + Operating time). In the calculation of new products and customer enquiries, various surcharges are additionally considered - as no machine runs with an OEE of 100%.At times without target time calculation according to REFA, in which work plans are frequently only “copied”, the search for the right cycle as a target time and for the calculation is often a continuous task which provides a lot of savings potential.However, in the case of offer calculation with realistic cycle values, not only the risk of loss is excluded. With knowledge of the actual lower limit for a calculated offer, one will perhaps secure orders which may have previously been rejected due to lack of knowledge.A similar case is the Continuous Improvement Process (CIP), which, in reliance on the alleged efficiency, is often not given the necessary importance. If it then becomes apparent that one is very far from the expected OEE related to the process than was believed, the CIP then also starts having a stronger focus.For the runtime of a product on a machine, Cosmino MES Plus therefore shows several “cycle types” to check the usability of the cycle times used in calculations and target times.

Illustration: Cosmino shift report with “Set Cycle”, “Planned Cycle” and “Calc. Cycle” per product in one shift. The planned cycle is the defined target cycle for an order. This depends on which equipment is used and, if applicable, also on how many people are working at the same work center at the same time. For an OEE calculation, the planned cycle should correspond to the technical cycle. This should therefore be corrected, if it becomes apparent based on the cycle analyses from Cosmino Reporting that the planned cycle will not been achieved.The “calculated cycle” is the average value of all cycles of the underlying period. In case of downtimes and cycle variations, this differs from the planned cycle, but it is the cycle which actually produces a specific order in the end. However, it is not the mean value of the actual cycle, but takes all the measured cycles into account, including the long cycles of downtimes. The “calculated cycle” of a product runtime should therefore match the calculation of this product runtime.Since Cosmino measures each individual calculated cycle during a runtime, cycle variations are also retrieved in the “calculated cycle” if this is calculated in real time in the Andon board of Cosmino WorkerPoint. The planned cycle which is also displayed here, however, will not change at all and the “set cycle” explained below will hopefully change only very seldom.The “set cycle” is a special feature of Cosmino MES Plus which is linked to the recording and analysis of cycle variations. This is the cycle time with which the machine was deliberately operated. Reasons such as bad material lead the machine operator to deliberately deviate from the standards. It is then necessary to also record the newly set cycle via the Cosmino Online-Dialog. Since, on the one hand, the reason for the intentional cycle deviation (e.g. “incorrect target times”, if the machine can run faster) can be stated on this occasion, on the other hand Cosmino would otherwise continually inform the person responsible for the machine that the “calculated cycle” deviates from the planned cycle.

Illustration: Real-time cycles of a machine in the Andon board of Cosmino WorkerPoint. It can be variably adjusted on which time basis the “calculated cycle” calculates in the real-time visualisation. In the example, the machine works faster than what has been specified and set. Regardless of the “set cycle”, the planned cycle is still used as a standard for the calculation of figures (KPIs). However, knowing why a machine was operated at a deviating speed is also valuable feedback.For evaluations such as cycle time analyses and the shift report, the calculated cycle is then respectively aggregated at the underlying time unit. This provides the analyst with a good picture of the actually recorded (average) cycle of a product.Actual cycle: To now calculate the actual Technical Cycle of an item on a machine, the recorded individual cycles (actual cycles) can be inspected without plant downtimes. The shortest measured cycle could even be saved as a drag indicator. A similar procedure is also common practice in energy management. If this saved minimum is undercut, the new value is adopted by the drag indicator.The cycle time analyses and the analyses of cycle deviations generally already show which product on which machine deviates the most from the target times. This then shows to “adjust plan-cycle” as soon as possible and to also consider this change in the calculation of offers. 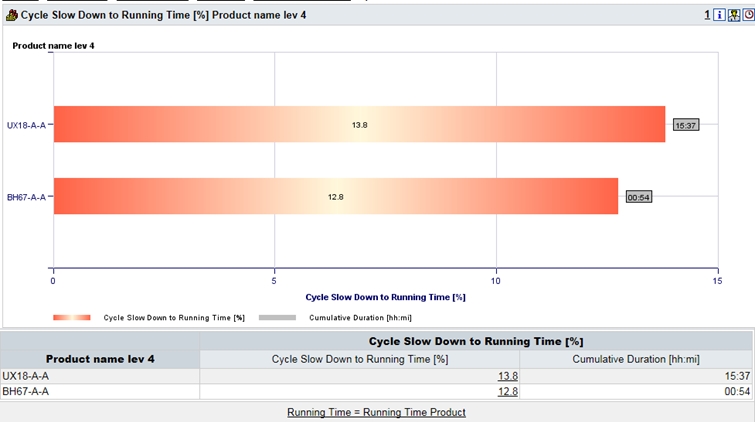 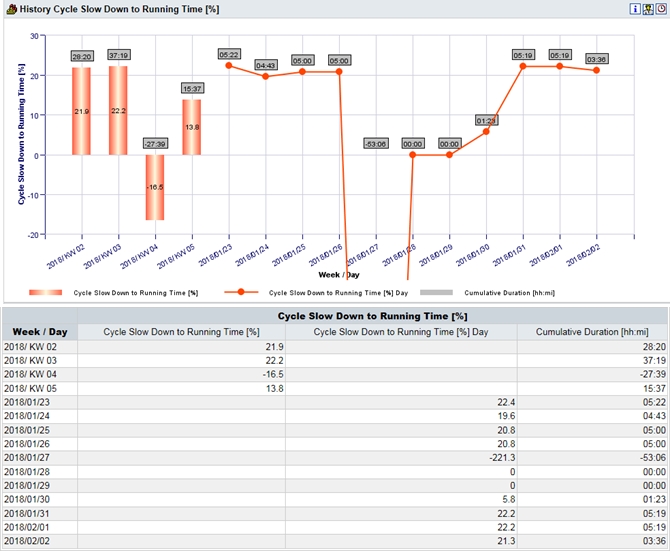