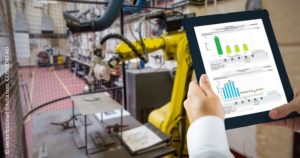 fig.: Energie management as a part of Cosmino MES Plus[/caption] Energy management in industrial operations is going beyond replacing traditional light bulbs with power-saving LEDs. Industrial manufacturing provides enormous potential for saving energy, which will only be found by taking a second look. This is reason enough for defining the Energy Management feature in VDI Guideline 5600 as the tenth task for manufacturing execution systems (MESs).

Why is the Acquisition and Analysis of Energy Consumption Data using MES System Mandatory?

The usefulness of absolute energy consumption without reference to system consumption or output is limited when the production equipment does not operate continuously. Fluctuations in loads can indicate energy effects that are not related to the output. Even frequent manual determination using output from expenses on a highly systematic basis (such as KwH/Ton as monthly values) will dilute the potential determination of averages. Many companies are starting to use isolated energy management systems because this appears to be less expensive at first glance. At the latest, the isolated solution must be replaced or expanded with interfaces with BDE & MES systems when associations between operational and machine data and energy consumption become necessary. The association of energy management software and MES systems cannot be avoided once a company’s energy consumption reaches a certain level. The following examples show the benefits of associating energy management systems with the production data that caused it. Association with the System Status: Significant potential for saving energy can be quickly realized when systems are idle for longer periods, because the system components are generally not turned off completely. This potential would remain hidden if energy measurements were not associated with the system status. By associating energy consumption and system status, the amount of energy consumed during idle periods quickly becomes transparent, along with the consideration of whether these expenses can be saved. The potential savings also become apparent by association with auxiliary systems like air conditioning, heating and compressed air supplies. Some companies have managed to save 7-digit amounts annually, because the auxiliary systems had continued to run during idle periods. Association with the Products produced: If the energy consumed by the production systems is associated with the products produced, insights can be gained about which system can produce products less expensively. Association with products also shows potential system optimizations, when the comparison of products indicate significant differences. Manufacturing products (such as furnaces) that are very different from each can consume more energy than products that are more similar to each other. The product energy footprint is being promoted in many industries. This concept is understood to mean the energy need for manufacturing certain products. Association with Orders or Batches: Batch sizes and other order characteristics can also significantly affect energy consumption. In the future, industrial companies are very likely to consider this value an initial parameter for automated production planning and optimization. Association with Measure Management in MES Systems: In general, measures should be processed in the same “pot” as other improvement measures related to production. If the manufacturing execution system employed has an integrated measures management system, measures can be associated directly with the master and result data. With the press of a button, production users can review all of the (energy-related) measures for the system or key performance indicators. The Energy Manager can also determine other actions for the system and their effects. Doing this allows decisions to be avoided that might have been made based on incomplete data. Association with Target & Threshold Management Systems in MES Systems: Target and threshold values for energy consumption can be defined at the production equipment (and product) level. With the help of these features, consumption during production can be monitored and warnings can be issued for maintenance, if values become too high with indicators of existing system problems or potential peak loads. Associating operational data can allow these threshold values to be determined reasonably. Preventative maintenance then becomes an advantage when an existing problem can be remedied before it can cause disruptions. Association with System Process Parameters: The comparison and determination of energy consumption can be reasonably determined for certain systems using the system process parameters, when the system can be operated at different load levels. Thus, energy consumption can be clearly determined for the production of the same quantity based on system settings or usage. In this manner, ideal settings can be determined in consideration of the energy consumed. Supporting Energy Management is ony one Reason why Production Operations are choosing MES Systems: A Manufacturing Execution System (MES) is a significant preparatory tool for Industry 4.0 and can create decisive competitive advantages by increasing transparency, quality and efficiency for manufacturing operations. Because MES systems provide support for a variety of tasks, their development structure is generally highly modular. Considering energy and operational data is entirely reasonable and does not require significant expansion to achieve the necessary feature set. Energy management can also be reasonable achieved without initiating a comprehensive MES project.